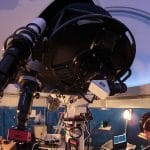 Our Rooisand Observatory is (almost) fully equipped. The telescope configuration consists of:

The Zeiss APQ has a focal length of 1,000mm and the TEC 660mm. Image field flattening optics are available for the TEC.

On this page, we have put together a number of DeepSky reference images that were recorded with our telescopes.

Incidentally, the Planewave is – despite the large obstruction of the secondary mirror – also ideally suited for observing the moon and planets.

At the foot of the Observatory, there is a concrete platform with a steel mounting connected to electricity. A small motorized Vixen GP mount can be set up on this with polar adjustment. Together with a small guide scope, the mount can be used for wide-angle shots of the Milky Way, constellations and zodiacal light.

Reference images of DeepSky, moon and planets, taken with the telescopes of the Rooisand Observatory

Most of the PlaneWave recordings were made with a TeleVue 0.8x reducer. The telescope then has a focal length of 2.500mm at f / 5.6 with a 17 ″ aperture. A detailed description and many test images can be found on the website of the Baader Planetarium company. Recording cameras were a Baader modified Canon EOS 40DA, a modified Canon EOS 60D, a SBIG ST-8300 Color and a CCD module ALCCD 8L. The guiding was done by a SBIG ST-i in the primary focus of the 130mm Zeis APQ refractor. The picture below left shows the Canon EOS 40DA together with the TeleVue reducer on the PlaneWave astrograph.

All images can be enlarged by clicking on the preview images. They are each opened in a separate browser window. Exact recording dates can be found in the large pictures at the bottom left. 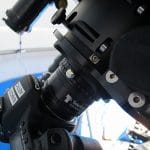 The image of the Laguna Nebula Messier 8 shows the “First Light” image on August 12, 2013.

40 single images were exposed for 30 seconds each with a Canon EOS 60 DA WITHOUT guiding.

The Planewave Astrograph was used in its primary focal length of 2.940mm at f / 6.8.

This image of the core area of the Orion Nebula Messier 42 demonstrates the high optical quality of the Planewave astrograph.
There were 40 short exposures at an exposure time of 10 seconds each, taken on March 28, 2014 with a Baader modified Canon EOS 40DA. 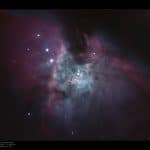 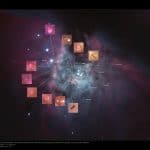 The star-like objects in the nebula marked in the preview image on the right are gas and dust disks in which stars are currently emerging.

These disks are also known as protoplanetary disks (Proplyds) because they are the primordial clouds for a current or future planet formation. The proplyds are illuminated by the light of the surrounding stars or stand out as dark dust discs against the bright nebula background. The trapezoid stars are completely resolved and many of the stars of the central cluster are visible. The modified EOS 40DA was used here because – for whatever reason – it reproduces the blue-green regions in the centre of the nebula in a much more differentiated manner than, for example, a modified EOS 60DA or 6DA.

The following are further examples of images, taken with the PlaneWave astrograph.
Click on the thumbnails to load larger images.

The PlaneWave astrograph is not necessarily the preferred telescope for high-resolution lunar and planetary photography because of its large obstruction in the secondary mirror. The following pictures may illustrate, however, that reputable image results are still possible.
The Venus image shows that the PlaneWave is also suitable for daylight imaging. 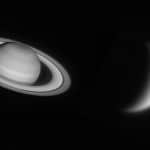 Venus and Saturn, taken on September 23, 2015 with the Rooisand 17 ″ PlaneWave in primary focus. Click on the thumbnails to load larger images.

Both images were taken with Celestron SkyRis 445 mono video module and Baader IR pass filter.
144 of 1,200 raw images (Saturn: 300 of 3,000) were stacked with AviStack. Final image editing with Photoshop.

All Images and all Content are © by Wolfgang Paech, Franz Hofmann + Rooisand Desert Ranch